Blog Tour: Book Spotlight/ Promo Post- The Best Is Yet To Come by Renee Peterson

It's our stop on The Best Is Yet To Come by Renee Peterson Blog Tour hosted by Asli!

Below is some info about the book for you!

Rafe Chauvin left his home in the blink of an eye twelve years ago, running from a secret he kept buried deep inside. The day after his high school graduation, he joined the Army to escape the pain the secret brought. When Serena Adams told Rafe Chauvin the lie of a lifetime twelve years ago, she thought he would be relieved. She never imagined what consequences that one reckless night would lead to. After years of trying to escape her lies, she returns to her hometown in South Louisiana. Hannah Matthews is a war widow. Her husband, Tom, left her behind with two very young daughters and made his best friend Rafe promise that if anything were to happen to him that he would look after his girls. Bound by honor, Rafe keeps his promise, stepping up and forming a close friendship with Hannah. When Serena is hired to plan the weddings of both Rafe’s brothers, they are brought together for the first time in over a decade. Lies are finally uncovered, leaving a trail of anger and bitterness in their wake. As the paths of these three individuals converge, and they reach a crossroads in their lives, will they move forward and discover that the best is yet to come? 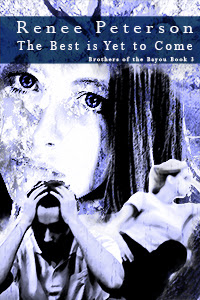 Renee Peterson is the author of the Brothers of the Bayou series and several short stories.  She has multiple works in progress to be released in the upcoming months. She spends most of her time raising two young kids and the remaining part of her time creating stories of love in the places she has been the places she wants to go. She grew up in the country side of Maryland, but has traveled around the country living in California's Mojave Desert, along the Crystal Coast of North Carolina and now resides in the Cajun country of Southern Louisiana where she has fallen in love with the culture and food. Renee loves hearing from her fans and welcomes their feedback.

Email ThisBlogThis!Share to TwitterShare to FacebookShare to Pinterest
Labels: Blog Tour, Book Spotlight, Promo Post, Renee Peterson, The Best Is Yet To Come